So a few weeks back, I received an impressive, and heartfelt note from my great-aunt.

She wrote to me on her typewriter, my family then scanned it, and e-mailed it for me to read. 🙂

In her letter, she had written a detailed account of her trip to Bangkok back in 1974. She told me about the temples she had visited, where she stayed, what she ate, and the local customs she had witnessed during her time here.

I was absolutely floored.

Not only had she written me a letter on her typewriter, which is vintage and fantastic all on its own. 😀

She had remembered with such vivid detail, a trip she had taken over forty years ago.

This blog post has become somewhat of an homage to her, and her trip to Bangkok back in the 1970’s.

I re-visited quite a few sights she had talked about in her letter, and took a peak at a few other historic places as well. 😀

For most, this post will showcase some of Bangkok’s most beautiful historic sites, and for my great-aunt, this will be a walk down memory lane. 🙂

This 19th century temple, made from imported Italian marble, has an elegant multi-tiered rooftop, decorated with elaborate gold fixtures and stunning stained-glass windows.

Wat Saket is an impressive golden temple from the 14th century, and the Golden Mount is a pilgrimage site for Buddhist worshippers. This 300 step up-hill journey will take you past lush greenery, golden statues, and antique bronze bells. The reward is an unbeatable panoramic view of the city, and gorgeous psychedelic Buddha statues and carvings. 😀

Wat Traimit is most well-known for its over 5,000 kilogram golden Buddha statue. During the Burmese invasion, this gold Buddha was covered in plaster stucco in order to prevent it from theft and destruction. Its beauty was unknown for almost 2,000 years until, in 1955, it was dropped in-transit, and the stucco chipped off, revealing its underlying golden beauty. 🙂

As the former reception hall of the Dusit Palace, Anata Samakhom Throne Hall was designed in Italian Renaissance style using striking white marble, set against a well-manicured lawn. It seems to be a unique piece of European architecture here in Bangkok. A true feast for the eyes! 😀 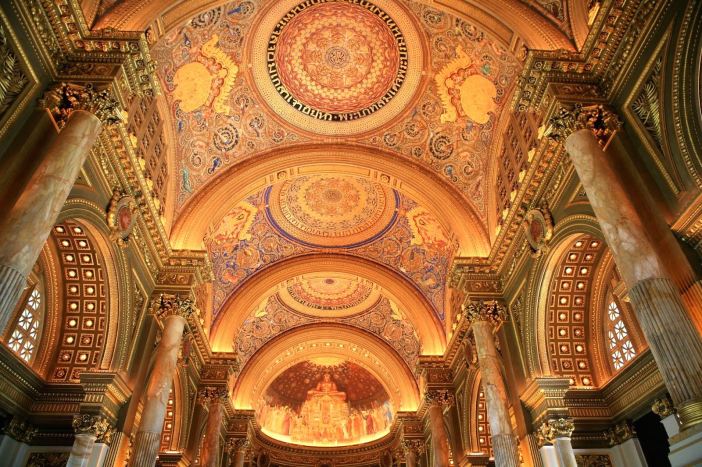 In fact, in addition to the “no photography rule,” there were quite a few rules I encountered on this sightseeing trip.

A contemporary arts center with exhibitions, films and live performances. Although not historic, my great-aunt had written how she ate mostly sandwiches and ice cream during her visit. Ice cream sounded like a great idea, so I stopped at Icedea inside the art and culture center for a quick scoop. 😀

Of course, I had to branch out and try the wasabi ice cream. It wasn’t too spicy, but I also have a cold and my taste buds weren’t at full strength. Hah.

The concept at Icedea, is more about food as an art piece.  They have ice cream “sushi” and even an ice cream “steak dinner.” 😛 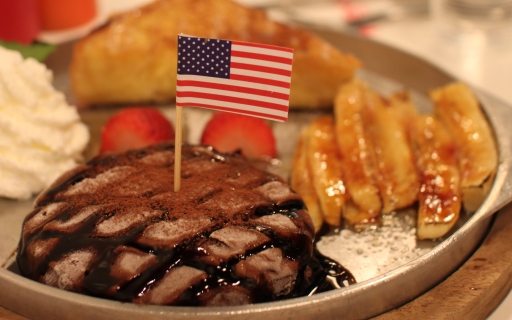 While I was there, I also viewed a few of the gorgeous exhibition pieces and interactive art.

Here, viewers are able to have their picture taken, and create their own Thai character in the interactive art scene. There I am! 😀

The Suravadee family was the original owner of the home, and their daughter (pictured above) was on the grounds during my visit. She is 80-years-old, and was happily playing solitaire on her computer. 🙂

Although there is free admission, with limited hours and an obscure back-alley location, your greatest challenge will be finding the place before it closes. If you do, you’ll sure be lucky you found it. 😉

As a WWII veteran of the US military, Jim Thompson is an honorable hero and legend in Thai history. He became interested in Thai silk while stationed here in Thailand, and decided to settle down in Bangkok after his service in the war. Using his keen skills in business and architecture, he helped form the Thai Silk Company Limited, which received international recognition and major success when its silks were used in the famous film, The King and I.

He also designed a unique home in Bangkok, which is a combination of six traditional Thai homes that were relocated from northern Thailand and renovated into impressive works of art. Mysteriously, while visiting the Cameroon highlands of Malaysia in 1967, Jim Thompson disappeared and was never seen again. To this day, his home remains preserved as a museum for viewer appreciation, and the mystery remains unsolved. 😕

A traditional and rustic 200 year-old wooden house nestled along the canal in a local Thai neighborhood, The Artist’s House was converted into a coffee-shop and art space. Visitors can get the real feeling of village life, feeding fish by the river and sitting on the dock, watching the long-tailed boats, and the world pass by. 🙂

The main attraction at The Artist’s House is the traditional Thai puppet show performed on a small wooden stage out back. The performance changes daily, usually based on stories of Thai mythology and folklore. Each show incorporates intricately painted puppets, manipulated by talented Thai artists, and viewing is free for all. 🙂

Here is a short clip of the show I watched. A combination of traditional Thai customs and unconventional surprises. 😛

Anyway, I hope you enjoyed this look into Bangkok’s past, and hopefully my great-aunt enjoyed this walk down memory lane. 🙂

After her trip to Thailand in the 1970’s, she traveled to Japan, and I’m happy to report that I’ll be following in her footsteps as well. 😀

In three weeks, I’ll be heading to Tokyo and Kyoto for a memorable Christmas and New Year in Japan. I can’t wait! 😀

Until then, there are still plenty of fun holiday events on the agenda here in Bangkok. Hope to tell you all about it in the next post. Have a great week everyone! 😀